Dear time-poor reader: Institutional investors have been caught out long in cash and high on defensives. Plus some experts are daring to ask that question

-Sceptics A-Plenty, But For How Long?
-Conviction Calls
-The Last Defensives?
-The End Of The Bear Market?
-Further Upside, Downside?

Sceptics A-Plenty, But For How Long?

Bank of America's global funds managers survey for April was released more than a week ago. In today's context this equals close to an eternity, but it's still worthwhile pointing out the main observations and conclusions.

The number one reason as to why this survey attracted more than usual attention is because it revealed cash levels among global fund managers had spiked to the highest level since 9/11 in 2001.

Number one conclusion to draw is thus that overall sentiment reached a low point in April, and we have seen equity markets continue their strong recovery throughout the month.

An overwhelming 93% is expecting an economic recession in the wake of the virus pandemic, which should be no surprise. Instead, my first mental response was: what exactly did the other 7% have in mind?

The high in cash coincided with a low in total allocations to equities. Instead, fund managers favoured bonds and cash and, among shares, healthcare, staples, utilities and technology. In terms of geography, US markets were most preferred.

Out of favour were European equities, including the UK, equities in general, and, within equity markets, energy, materials, banks and industrials.

When I was reading these core observations, I couldn't help but thinking I pretty much identified the same trend-lines in my market analysis on Monday. See Weekly Insights: https://www.fnarena.com/index.php/2020/04/30/rudis-view-solving-the-share-market-enigma/

The big question mark then becomes, if all of the above is reflected in today's share markets, when will change take place?

Bank of America itself draws upon the general scepticism from the April survey to conclude the current recovery rally will soon run out of breath. The advice to investors is to start taking profits when the S&P500 in the US reaches the 2850-3000 zone.

The majority of survey respondents believes the post-pandemic recovery will be U-shaped, meaning it won't be fast and smooth, but rather gradual and longer-winded; probably through stages of unlocking the lockdowns.

The question what will be the catalyst to power life into distressed cyclicals came in the form of an V. This time this V stands for "vaccine" - again highlighting general scepticism about the post-lockdown recovery, which equally reflects upon (the lack of) funds flows into beaten down laggards in the out-of-favour sectors mentioned earlier.

What then might bring down the almighty technology sector? Here the answers pointed to a much stronger US dollar in response to another major credit event, which might occur on the back of three identified weaknesses the world is facing today: the energy sector, the eurozone, and emerging markets.

Remarkably, only 15% of respondents predicted the post-virus recovery will be V-shaped. Total allocations to equities in April had sunk to their lowest level since March 2009.

Key findings of the BofA survey were replicated in the local version which is published by JP Morgan. Alas, JP Morgan's survey still reflects upon March, which is even further away (what stretches beyond "eternity"?).

So fund managers carried a lot of cash in March, and their portfolios were defensively positioned. This might be why, on JP Morgan's assessment, more than half (52%) managed to handsomely beat the falling index in that month by no less than 200bp.

And now for the interesting part... on JP Morgan's experience, based upon past data analysis, whenever the local funds management industry shifts into defensive portfolio positioning, such shift usually lasts 3-4 months.

The analysts make no bones about it. Will the shift that became apparent in March last that long? they ask out loud.

I'd wager that at least some of the excess sitting in cash has found its way back into equities, in particular during the week past. We won't know for certain until the next survey updates.

There is nothing that beats the threat of severely underperforming the market. Not when you're a fund manager worried about his job or -ultimately- survival.

On my observation, news flow is of most importance during a bear market and it can hardly be denied the flow of news has carried a positive undertone in April, and it still does. 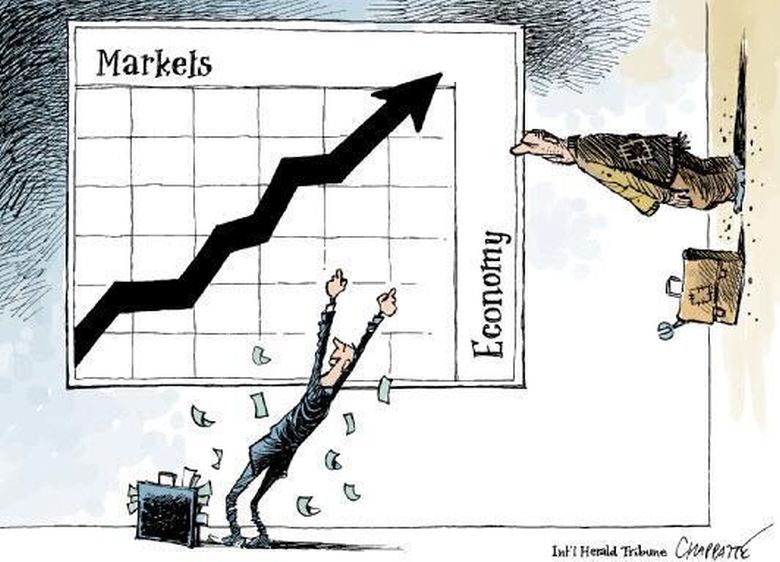 The above cartoon came across my Twitter feed during the week past. I couldn't help but thinking how clever, but also: how apposite!