5 quality companies mistreated by the market

My task today is to find for you 5 quality companies that have been mistreated by the market in the short term but really look attractive as long-term buys and holds.

I’ve been stimulated to do this by two interesting developments. First up, there has been the 40% rebound in the CBA share price since October when it was around $60. And as Paul Rickard and I were often telling you about how good CBA’s share price looked (especially when it got as low as $53.44 last year), it seems sensible to look for others.

By the way, neither of us thought we’d see the share price at $88 so soon but we did see it linked to a recovery of the economy, which has come faster than most expected.

I always like quality companies when the market has beaten them up but I like them as long-term holds. If I get an earlier-than-expected return, well, that’s all well and good.

Years ago I got it with BHP around $15, after being as low as $14. And then there’s been this recent great CBA price rebound.

The second reason for looking for more stocks like CBA, which has potential to rebound over time, is a gripe letter from a subscriber a few weeks ago, who was cheesed off at the showing of my ZEET stocks.

I don’t mind complaints because we’re here to help and educate and hopefully make you richer. But I do want to clarify something. And that something is time.

I never expected my ZEET stocks to shoot the lights out in the short term. But, over time, they’ve done pretty well since I wrote about them in June last year.

If someone had put $10,000 into each of these on June 1, you’d be up 13%. And if Viceroy hadn’t tried its outrageous short-selling stunt with Tyro, the return would’ve been higher:

That’s not bad. And I think there’ll be more gains as 2021 proceeds.

So to today’s stocks, let me remind you that these have been selected ahead of reporting and are expected to do well over time. The stocks are:

It’s hard for me to make an acronym out of these like I did with ZEET!

This is what the analysts surveyed by FNArena think about these 5 stocks:

Let’s go to the charts and see if they offer optimism or suggest a negative view on the companies in question.

It’s in the red but it looks like it’s trying to build a bottom around $265 to $270 and because it’s a notoriously good reporter, I’d gamble that these guys could surprise the market again on the way to another leg up.

That said, it has a currency headwind, and when we last saw a rising Aussie dollar, the CSL share price went sideways for a time. I’d be investing for a time when the local currency was on the slide.

The charts below show that as the Australian dollar gained against the US dollar between 2009 and 2014, going as high as 110 US cents, CSL’s share price went sideways, albeit on a rising trend.

Like CSL, the insurer IAG looks like it’s building a bottom. And given it was a $8.62 stock in mid-2019, it does have a history of higher share prices. Over the five years, the average price has been nicely over $6 and with the tailwind that Warren Buffett is invested in the company and the analysts see an 11.4% upside, this doesn’t look like a hard stock to like for the longer term.

Also, insurance is largely a grudge purchase and as more and more Australians throw off the fears of the Coronavirus and the short-lived recession, insurance will be a much easier sell.

The next stock is a reopening trade stock and Qantas is in the box seat to fly high in coming years, as its rival Virgin looks set to go down market. This should leave the very profitable business class sales strongly in the flying kangaroo’s coffers. Sure, it will take time for travel normalcy to return but it will reassert itself and Qantas is bound to win.

This is a more promising chart as the bottom has been built and is starting to trend up nicely. The analyst see a 10.2% upside but their view is much more shorter term than mine so I expect much better returns from all the stocks I’m looking at over the longer term.

Telstra has been a disappointing stock and even though I recommended it in the past when it was around $2.78, I do think it could easily get to $3.50 with the analysts seeing $3.56 as a probability.

Media reports on Telstra’s CEO, Andy Penn, indicate he’s doing his darndest to impress the market, so at its current price, TLS should be an OK punt.

The five-year chart for TLS makes you worry but, like CSL and IAG, it has been building a base with nice upside. I’m glad I bought in at $2.78 and am heartened by Macquarie’s $4 view but this has been a disappointing company in the past. But as I say, there have been a lot of positives in the press lately, so it’s a fingers crossed job!

My final stock, Xero, has a 16.4% downside rating by analysts but are there any outliers who think it’s a better stock than the consensus target of $108.16?

As I write, XRO is a $130 stock and the only analyst who agrees with me and my long-term liking for this company taking on the bookkeeping world is Macquarie, with a price expectation of $140.

Now remember, analysts take a shorter-term view on this company than I do. And I noted how at our webinar Michael Wayne from Medallion Financial said how Xero put up his fees last week and he didn’t think for one moment that he’d change his bookkeeping solution.

It’s my opinion that Xero is better than its rival MYOB — I was told this by many bookkeepers at a conference five years ago when Xero’s share price was only $14! —and the company will gradually win market share overseas.

I also can’t get out of my head that a prominent short seller, who’s a big shareholder of Xero, once told me socially that he thought this company one day would be a $600 company!

That’s his guess and he could’ve been using me as smart short sellers do with people in the media, but the thought of it and the Xero’s quality product has me, maybe irrationally, very supportive of the company.

And given my preference to buy quality companies when the market beats them up, it seems like a reasonable play for me.

Remember that Xero makes a lot of its money overseas, so it faces currency headwinds. Also, tech stocks were over-loved when it hit $157 and now a rotation is on that has de-loved some tech stocks but the love affair will resume — I’m sure of that.

If you’ve got long-term doubts about this company, just look at its five-year track record and weep if you didn’t jump on board before 2020, or just after the Coronavirus crash of the market when it fell to $54!

Xero might not surprise in the short term but in the longer term I’m sure it will. 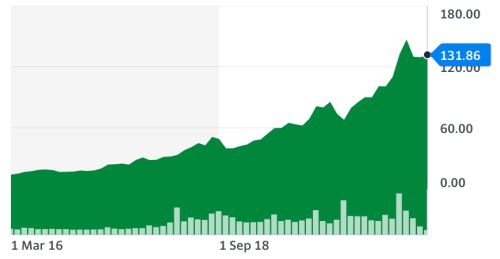