Edited excerpt from Shareplicity 2, A guide to investing in US stock markets: Secular Growth Megatrends & The S-Curve

If you are not familiar with the term ‘secular megatrends’, then put simply: secular growth is a fundamental change in a sector that creates strong long-term demand for a new product or service, that well exceeds the traditional cyclical upturns in economic activity; and let’s leave it to Macquarie Bank’s global equities strategist and big thinker Viktor Shvets to define megatrends:

‘Robotics, cloud computing, AI and 3D printing are revolutionizing energy, manufacturing and consumption. Beyond atoms lies the singularity (the inability to differentiate between human and non-human contribution).’  (From his book The Great Rupture.)

Viktor Shvets belongs to a group of experts who assert that we are on the cusp of the greatest technological innovation and disruption with the rollout of the 21st century’s secular megatrends over the next two decades and beyond.

I want you all to envisage autonomous robotaxis, smart appliances, smart clean energy systems and digital bitcoin wallets. All these innovations include or are part of the acceleration of DANCE, an acronym which stands for the growth business sectors of data, algorithms, networks, cloud computing and improved digital hardware. The lines between traditional hardware and software businesses are becoming increasingly blurred as smart hardware embraces cloud-operated software as a service (SaaS). As technology analyst Laura Martin stated:

‘AAPL (Apple) should be valued as an ecosystem company owing to its seamless integration of hardware, software and content, we believe.’

Yes, I can hear the guffaws of doubters and naysayers, but I wager that you will make more money by investing in the winning companies – or the ‘best in breed/sector/class’ of change-makers – in the second decade of 21st century megatrends than buying mature businesses in cyclical sectors.

Ecommerce is a great example of a secular growth trend. Online retail sales in the US have grown from around 0.5% of total retail sales in 1999 to around 20% by the end of 2020.

Secular trends can be impacted by changes in economic activity of a more cyclical nature but are generally perceived to be more resilient than traditional, cyclical business models and sectors, as demand can be sustained or grow during economic downturns (this is due to disruption or switching when consumers change from the older business to the newer one). In the case of the pandemic, a mix of enforced lockdowns and limits on discretionary expenditure for travel, tourism and the like substantially increased demand for online services and goods, reducing demand away from traditional bricks and mortar (physical shops).

According to James L. Callinan from Osterweis Capital Management, there are three drivers of secular growth:

This leads to what we are looking for in secular growth companies, the ‘S’ curve. 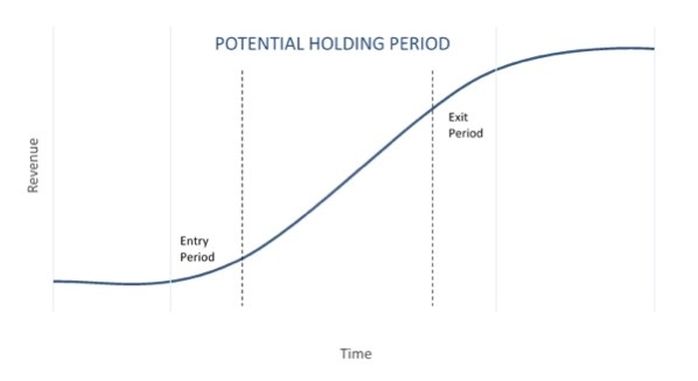 The S curve shows sales revenue from a new business model. Initially, it takes time for the product or service to develop and sales to grow, but once the adaptation, demand and popularity increases, sales have the potential to grow very strongly (see the mid-section of the curve in Figure 9). If the company fails to change and adapt through reinvesting, then it is likely the sales of the once innovator or change maker will slow down, as shown by the flattening of the curve.

The valuations given to companies on the S curve will change over the course of the curve as well. For example, in bull markets such as we saw in 2020, there was a lot of liquidity generated by the Fed and most secular stocks rose, and often rose steeply, even if the business was at the entry point. This meant investors were giving the company the benefit of the doubt in terms of its future growth potential, referred to as a ‘long earnings tail’ when earnings come well in the future. If the market thinks a stock will grow its revenue and earnings at a high compound average growth rate (CAGR), the total addressable market (TAM) is huge. In bull markets, with low interest rates, these stocks will be given crazy-high valuations, equal to and in excess of 50x a price-to-sales ratio. Investors may well look back at these valuations as excessive ‘bubble’-like multiples in a low interest rate world.

Many of the growth S curve start-ups have no reported earnings and their valuations are derived from the price-to-sales (revenue) multiple. (Valuation metrics will be explained in more detail later in this chapter and in chapters 6, 8 and 9.)

However, if there are any indications of a slowdown in revenue growth (either reported or indicated via the company’s outlook), the stock price is normally sold down heavily. This means a stock’s valuation will either contract or expand depending on whether the company can successfully execute the next phase of high revenue growth to penetrate the large TAM.