G8 Education ((GEM)) operates a portfolio of just over 500 childcare centres across Australia and Singapore. An investor day was held on 15 November 2018 to report management’s new strategy for the company. Presentations included a tour of one of G8’s centres in Nerang, followed by a detailed briefing covering the broader market, regulatory changes and the strategy to return the company to organic growth.

The quality of the early learning centre was truly impressive, and the tour highlighted that although the industry is complex in many ways the right formula can produce consistent quality cash flows from a loyal and repeat customer base.

Management’s strategy presentation was compelling and suggested that many of the legacy problems from the previous management had worked their way through the business, reducing challenges to execution.

At the right price, the yield could be attractive enough to compensate for the volatility while the strategy is executed which if done so effectively, will produce significant earnings growth.

The G8 Investor day began with a tour of the Kool Kids Centre at Nerang on the Gold Coast. Arriving at the site, the modern façade of the building presented very well and is specifically designed to look home-like and inviting which was later explained to part of the company’s marketing strategy going forward. It also contained a small coffee shop to one side which G8 leases to a third party. Parents dropping of their children simply waved at the café staff as they walked from their cars to signal they wanted a coffee, obviously regulars as the staff were confirming orders with a personalised ‘good morning’.

The entrance to the centre is locked and requires a pin code to enter which is provided to the parents. Sign-in is digital and linked directly to Centrelink’s network for fast facilitation of Child Care Subsidy (CSS) rebates. At first glance the facility was very impressive. It catered for children as young as newborns right up to starting pre-school. Around the centre were a variety of features to make the experience exciting for children including caged parrots, fish-tanks, water features, vegetable gardens and even a chicken coop. Occupancy for this site averaged at 90% despite their being a total of nine centres in the area, including a Goodstart which is said by the management team to be their most dominant competitor. The outperformance of occupancy for this site versus the group (71%) was said to be a result of the location and its modern design (built in 2016).

Daily rates for this centre ranged between $105 – $111 per day. Some parents pay as little as $14 of the total daily rate after the CSS rebate, while others are required (and a reasonable proportion do) to pay the full rate. There are currently 315 children enrolled in the centre. As an example of what scale of investment is required to build a greenfield facility, the cost to build this one was $5m. Noteworthy off-the-cuff comments made by the Centre Manager during the tour were:

• A significant amount of disruption occurred when the new CSS system was being implemented, all of which is behind them now and operations have returned to normal;

• Since the new pay structures (10% increase in wages for Early Childhood Teachers) and roll-out of the new staff benefits scheme1 the centre retention has increased significantly, and better candidates are applying for positions;

• Families have very close relationships with the centre staff and will often follow staff to other centres if they are to move; and

• There is some push-back on the plan to move to a call centre structure for incoming inquiries.

Technology is well integrated into the centres. There were interactive televisions set up in different class rooms as well as a cooking and science lab but most impressive was the iSandBox. An interactive digital display overlaid on a sand box that adjusts the vision depending on what structures the children were making with the sand. As the kids made islands, projected on those islands were trees and animals as sharks lurked in the lower areas between them. As the sand was moved around the projected adjusted the vision to suit. A teacher stood buy with an iPad, adjusting the interactive vision to facilitate the lesson the kids were learning.

Also onsite was an industrial kitchen that prepared meals. Children received at least one hot meal per day (4 in total). The kitchen also prepares takeaway breakfasts for Mums and Dads on the go.

Recent legislative changes now require all staff breaks to be covered by another staff member so that the child to teacher ratio remains the same constantly. Centre Managers have been able to completely absorb these extra staff hours without incurring additional costs with carefully structured rosters.

CEO Gary Carrol noted in his presentation that headwinds for the sector are expected to continue and that the occupancy improvement is set to plateau post 3rd quarter 2018. Supply of new centres has yet to significantly reduce however these are said to be the result of projects already in the pipeline. Credit tightening and lack of available capital is expected to begin tightening the supply of new centres into 2020. Discounting is still occurring across the industry, some competitors even offering free iPads to attract new customers. G8 reports not having increased any discounting offers above what has typically been the case for the past 3 years, instead offering customers a premium product at a fair price. The company’s research indicates that quality of the centre is far more correlated to increased occupancy for the majority of the portfolio than price, with the exception of some regional areas like Townsville where one centre increased occupancy by 25% simply by reducing the daily rate from $95 to $75. 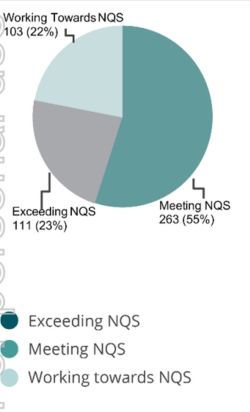 It was also reported that Australia has lower participation in early learning than most OECD countries and that every $1 that the Australian Government invests in funding for early learning, it receives a return of $1.30 in the form of higher tax revenue through increased workforce participation and higher household income.

In (General Manager of Operations) Jason Ball’s presentation he noted a simple strategy to return the company to consistent growth. The strategy can be simply broken down into three tasks:

Currently the G8 portfolio of brands is highly fragmented and each brand has their own website. Incoming phone calls go directly to the particular centre. These incoming phone calls go unanswered 20% of the time. The Company has trialled a call centre that receives all incoming calls and books the tours at the relevant centre. In the sample group this increased occupancy by 2%. This is intended to be rolled out across the group by April 2019. There are also plans to reinvent the G8 website and consolidate the brands to help potential customers more easily find a G8 centre that is convenient for them. This will also reduce marketing spend and provide better return on investment.

A marketing plan has also been developed that has identified pain points for customers including identifying available booking times at centres and transition through the various age brackets (infant, toddler, kindergarten etc.).

Customers are reported to be very loyal to centre staff. A quick Google review search of a couple of the centres in the G8 portfolio confirms this is important to customers.

Legislated staff ratios can be problematic and often require the company to contract ECTs on short notice through labour hire. It is estimated that these temp ECTs incur an additional cost of 20-25% to the company through uplift. Intention is to centralise the rostering process so that casual ECTs can be shared amongst the group.

A staff rewards scheme had also been designed that provides discounts to staff members and families at specific retailers. Feedback from the staff was positive about the scheme.

There is also a significant opportunity to generate cost efficiencies though centralisation of the procurement process. Currently each Centre Manager is responsible for arranging purchases or maintenance contracting. The company intends to centralise this process and leverage scale to achieve better prices.

The marketing team has profiled their customer base into four groups and identified specific offerings that will appeal to each individual group and the collective. This has been compiled into a newly implemented mobile application where parents can interact with the centres and also provides real-time updates to parents about their children, including photos, videos, sleep and diet reporting and if their child has an injury or isn’t feeling well. This new software platform is also said to significantly decrease the administrative workload for the staff. Surprisingly the new platform had not added costs to the business and replaced a redundant system since the arrival of the new CSS legislation.

While not yet out of the woods, the new management appears to be on the right track to return the company to organic growth. There are some questions about the previous management and legacy issues that may have been left behind after their departure, however these seem to be coming to an end.

An example of such issues impacted the current year result. A brownfield acquisition was somehow allowed to take place with the vendor retaining the rights to the brand and some centres. The vendor was also allowed to retain the website and ‘promised’ to forward all website enquiries to G8. Needless to say, the website inquiry for those particular acquisitions significantly underperformed the group. These centres have since been rebranded and inquiry now is in-line with the group.

There are also some questions around the soon to be completed greenfield acquisitions (which have been purposefully delayed so to coincide with the busiest intake time of the year). The greenfield acquisitions and the Singapore operations were both arranged under the previous management and are essentially related party transactions. A review of the Singapore operations will occur during the year and a decision will be made by management to either expand the footprint or divest. Retaining the operations sounds onerous and risky so likely the decision will be to divest. The balance sheet is robust enough to fund management’s plans, just. Examples were produced of other centres that management made minor improvements to, and the cost of these improvements ranged from $175,000 to as little as $50,000. In all cases improvements saw ratings and occupancy increase.

Management has also identified some underperforming centres that will be divested in the near-term. Cash generated can be used to help fund the new strategy. It was also reiterated that management are comfortable with the company’s debt headroom and expect debt to be brought back into line within their target of 1.5-1.7x by 2020.

The nature of the business is such that small improvements can have significant bottom line impact. Every 1% of additional occupancy across the group over a base of 75% (management’s near-term forecast) adds $3-5m of EBITDA. Over 81% the additional benefit of every 1% rises to $8-9m.

Whilst not without risk, the management team compelled confidence, and the strategy is simple and clear enough to be executed effectively. Additionally, at the right entry price the yield on offer is attractive compensation for weathering any potential price volatility while the market gets comfortable with the execution and results begin to show.

[Note: As of January 30, the FNArena broker database shows five Buy and one Hold rating (or equivalent) for G8 Education. The consensus price target is $3.06, suggesting 3.65 upside.]

This report does not include any recommendations. Before making any investment decision you should seek professional advice or conduct your own research.