Earlier this year, when stock markets were selling off, I was surprised how many fund managers wanted to say that they expected a market rebound later in the year. It was like fund managers got together and agreed to agree on what was going to happen! (It’s not true but it seems that way when they all hold similar views.)

On May 11, we got to 5425.2 but then the profit-takers couldn’t help themselves. That was high enough on fair value terms, which takes in companies’ profitability, interest rates, etc., and so they pocketed profit, which is quite rational. However, I’ve loved that the smarties haven’t had sufficient reason to take the market down further. The relative strength of iron ore and oil prices, along with better-than-expected economic data in the US, has put a nice floor under the stock market. However, the question remains: can we get off the floor and go higher?

Ari Wald, a technical expert at Oppenheimer Holdings Inc. in New York, is putting his money on a second half rally, he told CNBC. The chart above shows that corporate credit spreads are on the rise, which Wald sees as a positive signs for a future rally.

Meanwhile, a topping pattern has persisted with the key S&P 500 index, which makes him think a breakout is in the offing.

He also liked the breadth of the last US rally, with so many stocks participating in the spike upwards. He believes this is another good omen for a breakout higher.

In recent times, both of my charts guys — Lance Lai of Accountancy Invest and Gary Stone of Share Wealth Systems — had technical analysis pointing to positive outlooks for stocks. I like it when technical analysis supports fundamental analysis. That said, the threat of an interest rate rise could be a trigger for a short-term sell off, with the likes of Marcel taking profit now and obviously suspicious about how the stock market might react to a June rate rise in the US from the Fed.

But that’s the short term. I play a longer game and provided that the economic stories can keep raising optimism along with something important called profit, then I think our technical types will be on the money.

For us here in Australia, the growth prospects remain pretty good and I have argued that the Government’s 2.5% is too negative but this is still a good growth rate on a world comparison basis. And importantly, the dollar is 72.27 US cents and that’s also good for growth and so is a cash rate of 1.75%, which is expected to end up at least at 1.5%.

Macquarie thinks it could go to 1% and the stock market will see 5700 this year!

Lately, we’ve seen the US produce more positive economic data. Last week, it was Japan, which came out with a better-than-expected growth story — up 1.7% annualized — against a Reuters poll that tipped 0.2%!

To believe in a second-half rally, you have to simply remember May 2015 and where the stock market got to then. Let me remind you: 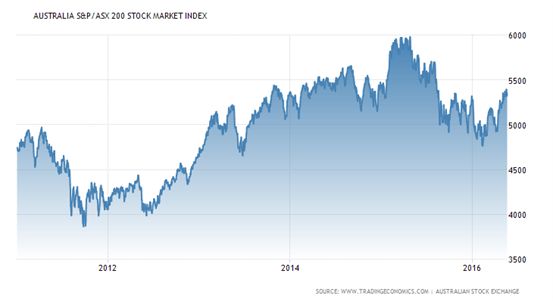 Yep, we nearly hit 6000 on the S&P/ASX 200 index but then the view on the world economy went south and so did stock prices.

Clearly, we need the views on economies and companies to head ‘north’. If they can, then this rally, seen in the entrails of these technical experts’ work, might set us up for a great finish to the year.

What could stop this happening? Try a Brexit, a surprisingly negative China story or Donald Trump becoming the 45th President of the USA!