Donald's damn dramatic trade war and how shareholders should play it!

Donald Trump fans who like to make money from their investments have to feel conflicted right now, with the US President single-handedly putting the global economy on track for recession, driven by his weaponization of tariffs. Not only he has upped the ante with his fight with Beijing, he has now put Mexico on notice that he'll slug every product they send to the US with a 5% tariff, unless they help stop the immigration flow into the United States and take steps to put the country's drug lords out of business.

These have given rise not just to Wall Street-market-driven, alarmist concerns but the big end of town CEOs are worried that their companies' futures could be affected.

The Mexican standoff news aside, the next biggest threat to world trade, market confidence and individual share prices has been China's suggestion that it will blacklist US companies that trade in China.

Any of us invested in Apple, FedEx, Starbucks, Walmart and many others could see their share prices crushed, if they get on the list!

So here's my first play. If you hold China-vulnerable stocks, I'd sell them and buy them after a big fall on the basis that Donald will have to pursue a peaceful settlement before going into the 2020 US election year.

I'd also be waiting to buy a Chinese-oriented ETF, which should bounce, if and when Donald cracks a deal. Clearly, I've underestimated how determined Trump is and how seriously he'll play hardball to get what he wants but he might have underestimated how easily the Chinese capitulate.

The next play involves the Aussie dollar.

On March 27, the South China Morning Post, talked about how vulnerable our dollar was to a trade war.

"The Australian dollar could struggle if a few opening salvoes between Washington and Beijing turn into a China-US trade war, given the importance of China as an export destination for Australia," wrote Neal Kimberley. "No one should underestimate the cross-border economic links between the two nations." 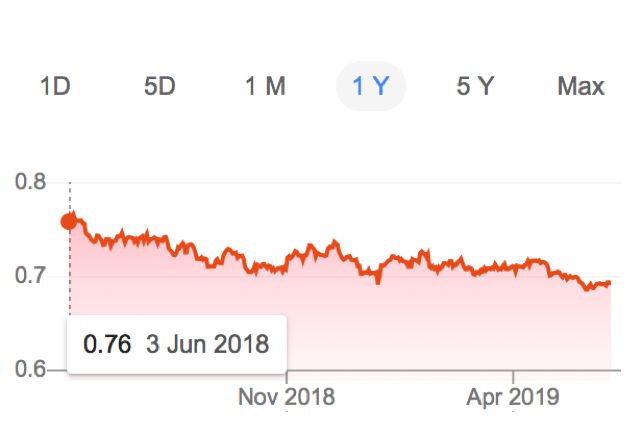 This is the ANZ view on our dollar. "Global risk sentiment has soured dramatically in the space of just a few weeks, which is bad news for the highly-cyclical AUD," says Daniel Been, head of FX strategy at ANZ, in a review of the bank's forecasts. "While the outlook for the major currencies has remained largely unchanged, we have drastically cut our forecasts for risk sensitive, cyclical currencies. We have made substantial downward revisions to our Asian currency forecasts as well as to the AUD."

The scariest call has come from Citigroup, where a 63 US cents call has been made public.

Since March, the dollar has dropped from 71 US cents to 69 US cents. If this Donald "drag'em out and slug'em negotiation" strategy makes matters worse, our dollar could slide even further.

My favourite currency play is Macquarie (MQG), which FN Arena says analysts have a $129.81 target for a stock now at $120.31. It could go lower over the next few days. That's nearly an 8% upside for the stock. CSL has only a 1.2% higher target but if the dollar falls harder than we think because of the escalation of trade tensions, then the $220 price forecasts some have been tipping might materialise.

Of course, with the unknown threat of what Trump's trade dealings could ultimately deliver, anyone who has no capital gains concerns could easily go to cash and wait out the negotiations and then buy back in when a deal is struck. However, with someone like Donald, you could be completely blindsided and a deal could emerge out of nothing but a Trump tweet!

If you don't want to be so drastic in your response, putting some stop loss orders in on those stocks that could be affected by a more serious trade war scenario could be an option.

Another option could be to take a more defensive stance with your portfolio on the basis that this bull market could be on its last legs. Selling stocks that are growth plays for ones that could push up your overall yield to 8%, or even more with franking credits, might be a sensible play.

Sure, a trade war causing a recession will hurt the share prices on yield stocks but provided you have at least 15-20 stocks, the yield shouldn't fall too far. Dividends resist gravity much better than stock prices when panic sets in.

Important information: This content has been prepared without taking account of the objectives, financial situation or needs of any particular individual. It does not constitute formal advice. For this reason, any individual should, before acting, consider the appropriateness of the information, having regard to the individual's objectives, financial situation and needs and, if necessary, seek appropriate professional advice.