Women plan to retire later, but still have less in super than men

Women are working for longer but compared to men, are looking at a lot less super on retirement.

Women are working until they are older but still leaving the workforce with less money in their superannuation funds than men have, according to new findings by Roy Morgan. Women planning to retire in the coming 12 months have an average of $177,000 in their super accounts, compared to an average of $309,000 for men, the research found. 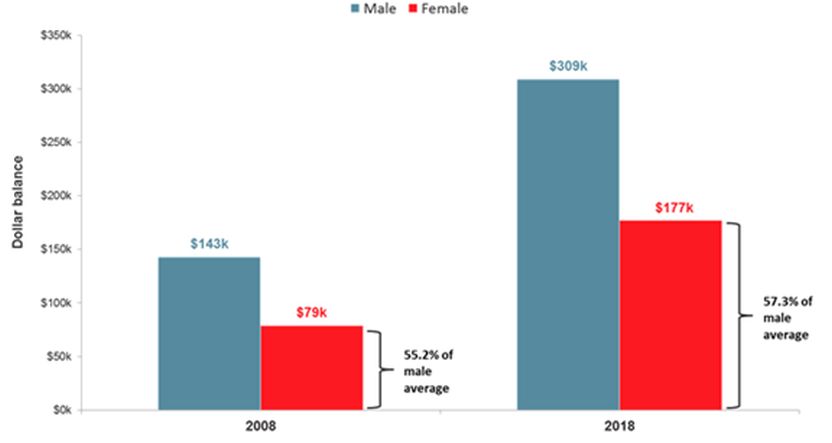 The findings come from the latest Roy Morgan Single Source survey, released on July 1. This annual survey brings together data from in-depth, face-to-face interviews conducted with more than 50,000 Australians in their own homes, including 2,200 people who plan to retire. An estimated 415,000 people intend to retire in the coming year.

Other findings from the Single Source survey, released on March 15, show that men and women are both putting back retirement, but the rise in women’s planned retirement age is most dramatic. The average age of women intending to retire this year is 61.8 years, an increase of 6.3 years since 2008. By contrast, men are planning to retire at 62, an increase of 2.9 years since a decade ago. This makes the average retirement age for men and women almost identical at just under 62. The decision to defer retirement and work until they are older suggests women are sensitive to the need to save more, especially given they have greater life expectancy than their male counterparts. But the persistent lag in women’s super balances, coming despite considerable publicity given to the issue in recent years, shows it would take many years of saving – not just an increase in awareness – to catch up with men.

“Despite real gains in employment for women over the last decade, they still lag males in terms of full time and overall employment levels,” he said.

“This has been one of the major reasons that overall female income levels are around 25% lower than males, which obviously in turn leads to lower superannuation contributions and balances when compared to males.”

Women’s lower average income, and the likelihood that they will have more interrupted employment patterns, explain why they have been unable to close the gap and “generally show inadequate superannuation for retirement”, he said. “It is likely to take some considerable time and changes to superannuation conditions for females to achieve an adequate level of superannuation more equivalent to their male counterparts.”

Morris said the more rapid increase in the age of females intending to retire compared to males over recent years is “a positive trend” since is enables women to increase their savings potential as they head into retirement. The Australian Government faces twin financial pressures on funding the age pension, from an increase in life expectancy on one hand and inadequate personal retirement savings on the other.

“Given this situation, it is a positive finding in this research that there has been a gradual increase in the age of intending retirees,” he said. “This results potentially in a longer period of paying tax, increased savings and as a result less time on the pension, possibly at a reduced level. However, one drawback of delayed retirement is that it may increase unemployment, with older workers occupying positions that younger people might otherwise have filled.”