This story features ARISTOCRAT LEISURE LIMITED, and other companies. For more info SHARE ANALYSIS: ALL

In this week's Weekly Analysis:

– All About Bonds (And Central Banks)
– Rudi On Tour
– Nothing Ever Changes, Or Does It?
– Rudi On TV

All About Bonds (And Central Banks)

Life is perception and nowhere is this universal truth as dominant and as tangible as in the share market.

Take the UK, for instance. The FTSE100 is up circa 12% since the initial plunge post the surprise outcome of the Brexit plebiscite in late June. Economic data have held up surprisingly well. If this is how UK citizens and businesses respond when under siege, then bring it on! When is the next Brexit?

Of course, in real life (IRL) things look a lot different. Analysts at Citi released a report last week in which they highlighted the gap between investors' perception and reality. UK equities have markedly outperformed their global peers over the past three months. The stone cold reality is, nevertheless, the UK's outlook has deteriorated, as explained by the Citi report "Brexit – storm in a teacup? What happens when central banks sugar the outcome".

The real impact was always going to be long term, explain the analysts in the report. The fact the UK economy at face value has been performing so well is because economists' expectations had fallen so low post Brexit. Add additional stimulus from a proactive Bank of England, plus a substantially weaker currency and the cocktail is complete.

To gauge share market performance, one only has to look at various currency movements. A stronger yen means Japanese equities are down double digits thus far in 2016. A slightly softer USD has translated into moderate returns for US equities. A significantly weaker GBP has facilitated substantial outperformance for UK equities.

In Australia, the stronger-for-longer Aussie dollar has kept a lid on the local share market. Total return year-to-date past the middle of the month point in September is still positive, but only just (+1.93%), and only when dividends are included.

These moves in currencies link back to central bank policies and manipulations of domestic bond markets. The Federal Reserve would like to start unwinding what it started in December 2008 (nearly eight years ago!), but central bankers in Europe and in Japan are nowhere near the point of completion with their extreme stimulus policies.

In fact, while many a market commentator points towards Janet Yellen and the US bond market to explain why shares in Transurban, Sydney Airport and the like are now out of favour on the ASX, it is the Bank of Japan that is causing global bond yields to rise. Pushing short term bond yields ever deeper into negative territory is not working. We know this now.

It does not mean ECB and BoJ are simply going to throw their hands up in the air and declare defeat. The latest "twist" in this sorry tale of extreme bond market manipulation is central bankers are now changing focus on steepening yield curves, whereby longer term yields are higher than shorter duration bonds.

So far bond markets are prepared to stick to the script written by central bankers. The mind shudders when thinking about the day this might no longer be the case.

USA Versus The Rest

One reason as to why many a fund manager is nervously watching, as the latest chapter in global central bank manipulation unfolds, is because there may not be any place to hide if/when this global experiment derails. From gold, to crude oil and metals, to equities,.. everything is impacted by global bond yields.

For equities, the importance of the latest "twist" in central banks' market intervention is probably best illustrated by the two charts below.

The first one shows what has every investor's heart beat racing; even after 7.5 years of strong bull market conditions, US equities continue to confound the critics by reaching for the stars, suggesting there could be a lot more upside potential on the horizon. The second chart reveals a picture that looks a lot less reassuring. As a matter of fact, this one looks quite frightening. It shows the rest of the world has not quite enjoyed the same bull market as have Facebook, Amazon and the like in the US. As we move throughout what is traditionally the weakest period in the year for equity markets, this glaring disparity between US equities and elsewhere in the world also shows up in shorter term trend analysis.

Take a look at the chart of the S&P500 below. I added two trend lines to illustrate what is going on beyond the multiples in interpretations, forecasts and commentaries. With US equities hitting a soft spot ahead of this week's FOMC meeting, it is possible, probably even likely, the index will puncture the trend line from the February lows (green), but a significant gap remains to the trend line in red, which started in early March 2009.

This suggests ongoing bull market conditions. With support from the February lows about to disappear, it may well be that US equities are in for rougher times ahead, but plenty of weakness can ensue while still keeping the uptrend intact that started in March 2009 (7.5 years ago). This is not what it looks like on charts for most other markets. In Australia, as your gut probably would have told you, the ASX200 has already broken below the trend line off the February low. We are not about to break through trend support from March 2009, but at the same time, it would not require an extraordinary outburst to the downside to get us there.

Thus far, my basic chart analysis signals we might be facing a less accommodating environment, in line with seasonal patterns for the time of the year, but nothing that suggests the longer term uptrend off the 2009 bear market low is about to be threatened. Investors shouldn't be overly complacent with the 200 moving average (MA) flatlining around 5200, which is where the ASX200 bounced off on Friday. 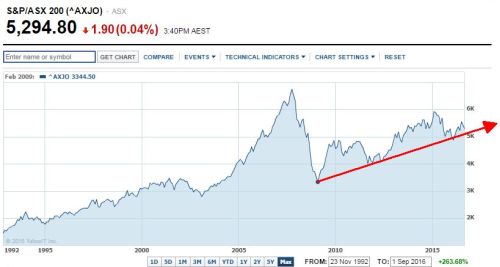 As per usual, share market weakness goes hand in hand with plenty of uncertainty and unanswered questions. Is the weakness in US data a temporary phenomenon or the harbinger of a softer-for-much-longer environment ahead? Can the Federal Reserve hike interest rates in 2016? Will the earnings recession for corporate America continue? What if Donald Trump makes it to the White House? Is there a Chinese banking crisis but a stronger greenback away? How low will prices fall for apartments in Australia next year?

Most questions on investors' mind are doomed to be of secondary importance only. With government bond yields once again adjusting to a change in central bank policy, watching global yields move in orderly fashion, and through baby steps only, is from now onwards the key factor in the outlook for all financial assets, apart from cash under the mattress, that is.

Those investors who'd like to treat this year's seasonal weakness as a buying opportunity might want to take note of Macquarie's analysis post the August reporting season in Australia. The stocks below have been identified as the highest quality growth options available. Strategists at Deutsche Bank upgraded mining stocks to Overweight, while reducing banks from mildly overweight back to Neutral, as well as trimming overweight positions in housing sector related stocks. Deutsche Bank is cautious on defensives and doesn't like non-bank financials.

I will be presenting:

Nothing Ever Changes, Or Does It?

Yes, of course, investing in the share market is never really different and best working strategies today are the same that worked pre-GFC. Seriously. I tell you, seriously. Now that we had a good laugh about it, let's get straight to business. This is a low growth environment. Has been since 2010 (it was masked at the time because of the V-shaped recovery from the global recession) and it is not likely to change fundamentally in the near term. I wrote a book about this (see below). This means investment strategies must adapt. You'll be turning your portfolio into a wish list for dinosaurs otherwise (and your returns will be a reflection of it).

Those not afraid to contemplate "this time is different" can subscribe to FNArena and read all about it in our bonus eBooklets 'Make Risk Your Friend' (free with a paid 6 or 12 months subscription) plus the freshly published eBook 'Change. Investing in a low growth world' (equally free with subscription, or available through Amazon and other online distributors).

(This story was written on Monday 19th September 2016. It was published on the day in the form of an email to paying subscribers at FNArena).